Kopiko Aotearoa Day 10 — starts very early and, like day 7, it starts with armed hunters. I stir to the thump of boot steps on the hut veranda and a hunter enters with his head torch pointed into my bleary eyes at 1.30am. They announce they’re up to do a recce for the upcoming ‘roar’ (deer mating season) and doing some spotlighting (hunting at night with a strong light), they’re going to sleep a few hours and head off again early.
We bump into the hunters Ash and Haami on the trail later that morning, and I do a pretty poor sketch of them that I colour later from memory. The last half of the Pakihi trail is fantastic, lots of swing bridges over the crystal clear river surrounded by dense bush. I’ll definitely be back to do these trails again!
At the end of the trail we come across what's left of a 1930 Ford car. Of course that had to go into my sketchbook too. We ride out of the national park onto the plains, past dairy farms and on to Ōpotiki, we stop at a cafe then leave town and on to the coastal dunes trail. It's nice to be riding along the Pacific Ocean again!
The dunes trail is sweet, but as it turns out, sapping on the legs and our expected ‘fast, flat ride’ along the coast is interrupted by lots of climbs. I stop at the top of one of these bluffs and meet Des. He’s sitting on the road barrier taking a 'smoko' break surrounded by a number of 1 ton bags of rubbish. Trailing off down the cliff is a long rope that is strapped to the barrier and I see his ventilator beside it on the ground. I learn that Des has been travelling the country for 2 years picking up rubbish. It looks really bloody dangerous. Des is a legend in my book and my vote for New Zealander of the year. He could use your help — make sure you visit his page and leave a donation.
I want to stop more and sketch some of the carved pou and marae along the way, but the scent of the finish keeps us pedaling. If we can get as far as Maraekaho or Waihau Bay today we’ll be in striking distance of the finish tomorrow. We do eventually make it to Maraekaho – exhausted. Maraekaho is beautiful, a gift to the sketchbook, and someone has even parked their 1950’s Ford Fairlane with a matching 50's caravan under one of the enormous pohutukawa trees - but first it’s time for a swim!
Kopiko Aotearoa – last day: one last big (115 or so km) day to the end! We leave beautiful Maraekaho with wet tents – that’s the first night of rain on the whole trip! We head east with awesome views along the coast all the way to Waihau Bay. We grab a coffee at my riding mates old school at Raukokore, the school has closed but Kura Cafe is open. Next Waihou bay where we grab a pie for breakfast and a melting moment that’s so big it should be called a ‘many melting moments’.
Then inland from the west side of the east coast as we head to the east coast of the west (if that makes any sense). We come out at Hicks Bay and bump into cyclist Josh. His Surly Disk Trucker is fully loaded with Carradice panniers, he’s not doing the Kopiko, had planed to be cycling from London to Singapore until COVID hit. Instead he's cycling all the way up from Christchurch in the South Island and is heading to Cape Reinga (top of the North Island). Nice.
Onward 40 more kms to go through Te Araroa with a stop for yet more food and the coast road again with beautiful views. A strong tailwind helps make the last 20 kilometres really zoom past. I’m enjoying the old cars dotted here and there along the coast: A couple of Bedford vans and 3 or 4 old Landrovers, all beautified with rust and long grass – I'll have to come back and sketch them some time.
We eventually make it to the road end – we've made it to the eastern most part of the country. But we're not finished yet – we have to walk the 800 steps up to the lighthouse to make it offical! Once up there we're presented with amazing views out to the east. I can't help but think the next stop Chile is just there over the horizon (I've just checked it online and it's actually 10,000km).The event requires that we prove we've completed the event with a photo, but we have been so off the grid we have no cell phone charge. Luckily we meet a couple who take a photo for us and send it to us. Nice one, thanks guys!

I was surprised to discover the lighthouse used to actually be on East Island (that's it off to the left of the sketch). Authorities worried that erosion would topple the lighthouse into the ocean moved here onto the mainland.
With my sketch done thoughts turn to how we're getting to our accommodation for the night – back 40 kms at Hicks Bay – especially as that fantastic tailwind that pushed us here will now be a mean headwind! Luckily we discover we’ve got a ride waiting for us below – Mum and Dad have arrived with a bike rack on there car and celebratory beers – what a relief.

So that's our Kopiko Aotearoa; 11 days, 1200km of cycling including 20,000 metres of climbing (the equivalent of climbing Mt Everest – twice) and 2 sketchbooks!
Thank you to Jonathan Kennett for designing such a great course and my riding mate Ian for coming along – it would have been lonely at times doing it alone. 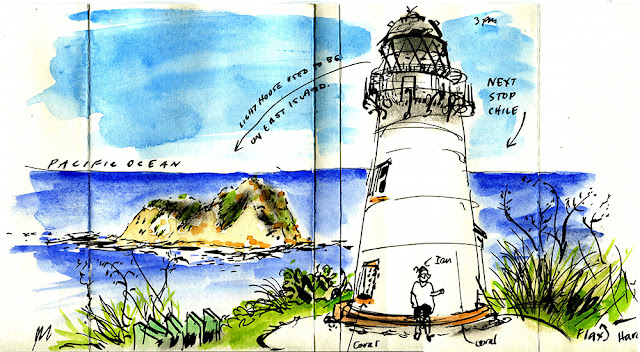