Kopiko Aotearoa – Days 3, 4 & 5 – starting to get used to this bike-packing thing

I wake to the pleasant sound of horses munching grass outside my tent. Nice! Ohura is still dark and misty when we're back on our bikes and riding up the beautiful Matiere valley, past lots of old sheds and houses like this sketch. The legs feel weary but the body is slowly getting used to this routine. In Ongarue we stop off at the Flashpackers to pick up our pre-mailed supplies (we've sent deny food for Rem to hold for us as there won't be many shops in the days ahead) and cook up a lunch of noodles. Rem appears from somewhere looking a bit like some sort of holy man wearing a white turban, a lava lava and an impressive beard. As usual my sketch makes him look older than he really is - sorry Rem! Rem fuels us up and riders start appearing in various states and with bikes in varying degrees of decay. One guy is considering riding to Rotorua to get a bottom bracket he's worried it won't make it to the end. That's a long way to ride for a repair, but then again a bike is useless without one and there are no bikeshops on the Kopiko.

On the bike again and we're into the Timber Trail where we swap gravel and sealed roads for proper twisty MTB single track through dense forest. Were also riding the ‘wrong way’ - most people ride this trail in the opposite direction to take advantage of all the downhills, but not us, we're riding uphill luckily the trail is so good we don’t really notice. The trail is broken up by long swing bridges over the river. It is so spectacular I make the mistake of trying to look at the view while riding on the narrow bridge boards – this makes me lose balance and almost crash – it’s a long way down – and I feel nauseous! Best to look straight ahead while riding them or walk across and enjoy the view I decide. We finish the day sitting around a roaring fire at Camp Epic, a 'clamping' camp half way through the trail. We're not here to clamp though so go for the cheap option and put our own tents up. 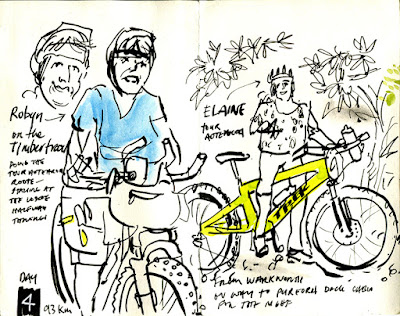 Kopiko Aotearoa Day 4
Day 4 was long and hard! The day started really well, the second half of the Timber Trail especially with that beautiful winding downhill to the end was mint. We meet some Tour Aotearoa cyclists on the way which lightens the day – Robyn with her handbag hanging over her handlebars and Elaine above. The following hours of slow gravel road slog really take it out of the legs. We need a cook-up on the camp stove at Pureora to revive energy levels and my riding mate is talking up how great his 'Butt butter' is working. It's an ointment applied 'back there' that keeps everything feeling great. Currently my back-end is feeling like it's connected to the national grid and I get a shock every time my seat hits the saddle.
There was an amazing downhill before the Arataki swing bridge followed by a spirited chase from a farm dog that wants piece of my calf muscle before the superb Waikato River trails which would have been really enjoyable any other day but I'm exhausted. 14 hours on and off the saddle for only 95km and we're so exhausted we don't make our intended camp at Whakamaru so we pitch camp on the Waikato river trail as the sun goes down and trout are splashing as they try to catch nymphs.

Kopiko Aotearoa Day 5
Day 5 was awesome, it started on the the Waikato trails again, we ride past no less than 3 hydro electric dams and, Pohaturoa, the craggy mountain you see rising out of the forest. It once had a Māori village perched on top with some 300 people living there. They must have been rock climbers! Later we ride past bubbling mud pools, lots of multi-coloured beehives, we eat lots of sweet wild blackberries and a neat pale blue 1930 Ford displayed for sale in a farmers front paddock.
We finish the day camping at the excellent Waikite Valley thermal pools. Cool to be back in geothermal country and get to soak the aching muscles in various hot pools.