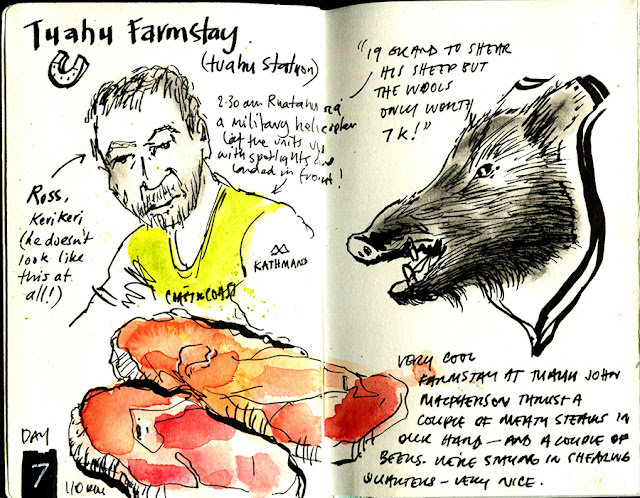 Kopiko Day 6 was a big one! Starting with a nasty climb out of Waikite Valley, which in turn is an invigorating downhill on the othertside. We ride one of the few State Highway sections for a few kilometres looking for the turn off into the Rainbow Mountain single track. We take the wrong turn but it  didn't slow us down too much — must have been last nights hot pools that rejuvenated the legs.

The following long flat tarseal section stretches all the way to Murupara, a forestry town in the middle of Kaingaroa Forest. Riding that long on flat roads really aggravated my sore arse

ouch! All was well though once we hit Murupara and settled into De'Cafe for a big lunch and where a big bunch of east - west riders arrive. Anne-Maree, George, Joe, Anne, Matt and others. I manage to draw a few of them while a few locals look surprised to see so many visitors today. Meanwhile over the radio ‘You’re listening to DJ Che, A big welcome to our manuhiri on bicycles...’ Radio station Te Reo o Tawhiuau must overlook the cafe.

We say goodbye and start climbing, and climbing heading east. We pass a number of ornately carved whare whakairo like the Waikotikoti marae sketched roughly here. Then past Mingunui and we're feeling very, very remote, up over the Tarapounamu Saddle where we meet self-described ‘Dutchie and a half’ pairing of Jos and son Luke both looking super amped to be riding out in the middle of nowhere. We ride through Ruatāhuna and there are horses everywhere, more horses than cars, and they're on the road – even saw a guy towing a horse (slowly) with his ute — maybe he was breaking it in?

We finish the day at idillic, bush clad Orangihikoia department of conservation camp when we realised it was getting dark and had no chance of making Waikaremoana today!

Kopiko Aotearoa day 7 started with a Booooooom!!!! The unmistakeable crack of a large caliber rifle fired near my head — well close enough — actually just across the road but it feels much closer. I check my watch and it’s 3:30 am! Hunters are 'spotlighting' along the road from a ute. Terrifying. Mōrena e hoa!

Later that morning we’re starting to get enticing peeks of Lake Waikaremoana through the dense bush. Beautiful.

Then we run into our friends group. They’re riding in the other direction to us and they’re the reason we pushed on so late yesterday trying to meet them. We spend some time catching up, taking photos, it's all a bit like a high school reunion. A while later we stop at the Waikaremoana camp store and hear stories of the 'walking wounded' who came through last week during the storm, they were on the hunt for hot pies.

We dodge a lot of roadkill today, dozens of possums and 1 wallaby thanks to our spotlighting hunter friends. Pretty gross, but these animals are introduced pests to New Zealand that decimate forest and kill native birds, it's a constant battle keeping their numbers down. Lake Waikaremoana is vast. You look across at those impressive Panekire bluffs surrounded by massive podocarp forest that have been around since Aotearoa was attached to Gondwanaland — of course it’s a must draw moment.

Sketch done we leave the bush behind on a long descend down past Tuai (another dam) through the Ohuka valley. Ohuka country school is open with a Kopiko Riders Welcome sign out. We wander in hoping for water but teacher Sharon sets us up with fruit and coffee, next we’re swimming in their pool! Neat school and the roll is just 6 students.

Straight away we're riding up what I like to call the hell hill of Ohuka (whoever designed the road should be shot) and the swim is almost instantly forgotten. Onward up the Ruakituri valley, more hills, and gravel roads with massive views as we get higher above Hawkes Bay. It has been a big day in the saddle so, exhausted, we pull into the Tuahu Station driveway where we meet John. ‘You guys want some steak?’ He asks followed by ‘beers are around there’. With steak and beer in hand he points us toward the sheerers quarters — best welcome ever! We meet Ross at the shearer’s quarters, he’s already set-up for the night (he doesn’t look anything like my sketch!).
Email Post
Labels: Aotearoa Bike bike packing blog Kopiko Aotearoa New Zealand Reportage