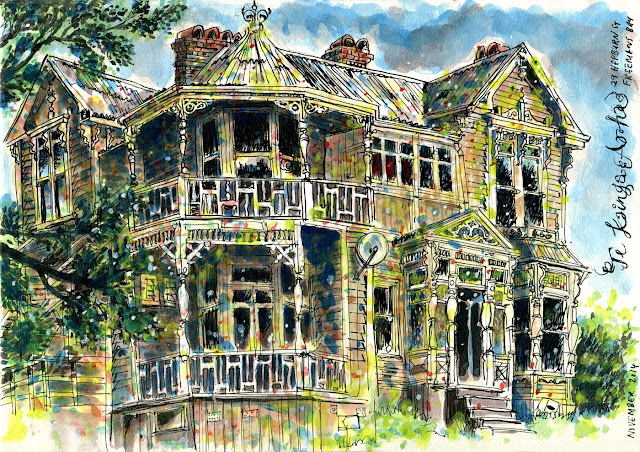 This house on the corner at Hepburn and Smith Streets in Freemans Bay was sketched on site in 2014. I sat in the front yard sketching the dilapidated old building thinking she was likely to ultimately end up demolished.

It's a white house and sketched in summer the bright light made it look even whiter, also, drawing all those twiddly details had done my head in and taken so long that I decided not to colour it. I'm pleased I didn't because today I've coloured it according to it's colourful history rather than it's actual colour. A lot more fun I reckon, wonky perspective and all.

It does have some history too, apparently owned by a mayor of Auckland at some stage, it was a lodge for Maori girls for 70 years (called Te Kainga Aroha), and the current owners have moved it sideways 15 metres before restoring it. I guess it;s going to be around for a while longer yet.
Email Post
Labels: Freemans Bay Ponsonby Villa