I know I've been boring you with lots of car sketches lately but here we go again — sorry. This time it's the Ellerslie Intermarque Concours and Classic Car Show Incorporated I think it's called officially.

The display was impressive. I haven't been for a decade or so, so I was surprised. I wanted to draw as much as I could, so I only coloured one on site, basically just bashing out the line work and moving on quickly to the next one. 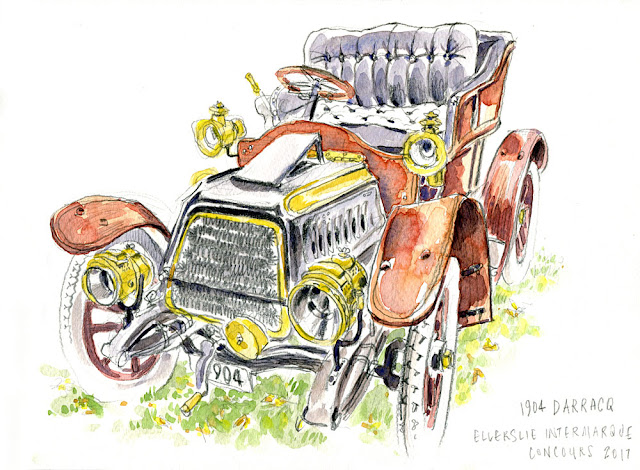 Here's a good example of an interesting car – a 1904 Darracq.

The Holden club had a really cool display. I like what they'd done with the Day at the Races theme, even down to the black tape on the headlights - in the fashion of racers back in the day. An FJ, an EH, an HT Monaro and a Torana GTR XU-1 in metallic purple of course.

It was hard to walk past this Mini Cooper. A genuine cooper updated to a faithful replica of 977 ARX which placed 3rd in the 1963 Monte Carlo Rally, complete with spare wheels on the roof rack.

This is just some of them – there's more to come in a following post. There were plenty I would have loved to have drawn, like the one off 1938 6C 2300B Alfa Romeo — wow!
Email Post
Labels: Car Ellerslie