It's winter in New Zealand - the time we all start thinking about heading somewhere warm. Last year we took advantage of a what must be the best package deal to Tahiti that I've ever seen for a week on Tahiti Nui, the main island of Tahiti, so not quite the Tahiti of travel brochures - they're all taken on Tahiti's exotic (and uber expensive) outer islands. Not to worry we thought, at least it will be warm!

We were staying in the newish Manava Suite Resort in Puna'auia, maybe 8kms around the coast from Papeete. Not a resort as such and all the better for it, smaller, self catering, with no beach as such but with a great infinity pool and spectacular views toward Moorea. We found the close proximity to Papeete a real bonus, we could bus into town and wander around for the day. There's plenty to do in town too, from the pumping Marche de Papeete for spectacular island produce, cafes, some French colonial architectural charm such as the Cathedral de Notre Dame.

The bus trip turned into a bit of an adventure one day when our driver took a detour up into the hills and we got stuck in a drain when negotiating a 10-point turn on a steep street, these ladies were hilarious and strangely became one of the highlights of the trip…

Le Roulottes are the way to eat out in Tahiti, much cheaper than restaurants and it's pretty pleasant sitting outside with locals at night. This is the the Temaiti Westside Roulotte, just over the road from the hotel in the Quincaillerie Hughes carpark for E'ia Ota and below Le Crepescule a creperie a bit further toward town for crepes and gillettes... 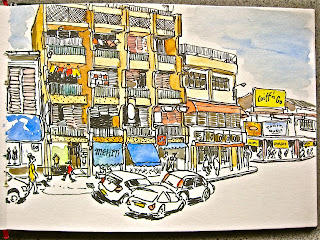 This part of Tahiti is super busy, thousands of European cars race past while I wait for the bus, and in town at the 'Coiff n'Go', what a great name!


A trip by ferry over to Moorea was worth it for a glimpse into the resort side of Tahiti, we spent most of the day swimming with 'locals' (mostly Tahitians over from the mainland for the day), then wandered through the Sofitel resort at the far end on the way home.
So my recommendation is if you see a cheap package to mainland Tahiti, take it, it's certainly not paradise, but coming from a wet Auckland winter it's pretty close.
Email Post
Labels: Carnet de voyage Reportage Tahiti