The Incredible moving pub II, a photo by Mr Dewhurst on Flickr.
I've posted an earlier version of the Birdcage Tavern last year before it was pushed up the road on 3 enormous concrete rails.

The old hotel was moved to allow a 'cut and cover' motorway tunnel to be constructed underneath. One of our oldest pubs (1884), it was once situated very close to the Freemans Bay waterfront, but with land reclamation early last century the beach moved away and today the motorway has moved in with the older overhead viaduct joined by a motorway tunnel beneath.

The Birdcage Tavern will be shunted back down to it's original position, about 40 metres to the left. This is the view from Franklin road toward the city. By the end of Tuesday, the pub should be back in it's rightful position roughly where the digger is sitting in this picture.

Viewed from under viaduct July, 2010 and a shot of one of the rails... 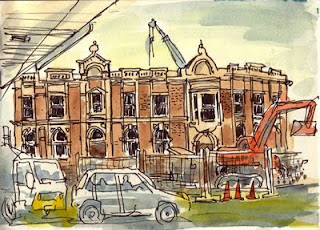 dinahmow said…
Ah! The Birdcage!
I lived in Herne Bay in the 60s and have fond memories of this (and one or two other pubs!)
Nice to see an old place being kept, rather than demolished.
April 10, 2011 at 1:51 AM