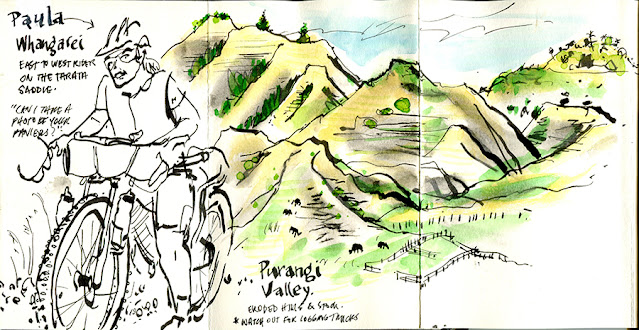 Day 2 starts with the realisation that my sleeping bag isn't warm enough. At some stage in the night I've fitted thermal gloves – to my feet, all my clothes are on and I'm wearing a merino hat on and it's still cold. Mmmm hopefully that's a 1-off cold snap.

Never mind, after an early start, tents and cookers are packed up and we set about up riding over 4 saddles and they're long, winding and hot! The scenery through most of the day looks a lot like this sketch of Purangi Valley, dry and craggy. Our early European settlers did a massive job of clearing dense bush to create farmable pasture, but why they removed bush from the sides of such steep valley walls eludes me. They're left looking nude and craggy through 150 years of land slips and topsoil erosion. Sheep take shelter from the sun behind the what foliage is left as we crank upwards.

Coming down one of these saddles we run into Paula and group from Whangarei. They're riding east to west and the first thing she asks is ‘Can I take a photo of your panniers?'. I'm using older style Carradice panniers not used so much for bike packing. ‘Sure', I said, '...if I can sketch you?.' She agrees immediately before taking a moment to realise what I mean. I pull the sketchbook out of my pocket. This is my chance to whip out the sketchbook and sketch my first victim.

Finally over the lush bush climb up the Whangamomona saddle, we stop for a quick chat to an elderly couple who have cycled all the way down from Tauranga! They look fresh, a bit like they're out for a routine walk around their neighbourhood – I wish I felt how they look! We enjoy the down-hill blast into the Whangamomona a tiny town on the Forgotten World Highway a remote region that began to fall into decline partly because many of it's young men were casualties in World War 1. We stop in at the Whangamomona Hotel for an enormous omelette, coffee and lots of chat with other Kopiko cyclists, motorcyclists and beekeepers also enjoying the hotels services and banter with the publican who's a bit of a character. 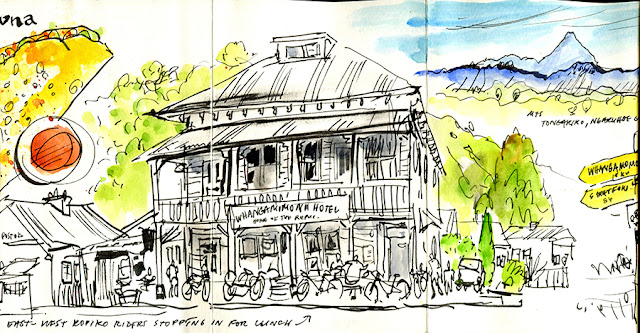 On the go again and we're immediately riding up another saddle! The reward though is a clear view of Mounts Ruapehu, Ngaruhoe and Tongariro across the ranges. Awesome.

[By Murray Dewhurst in New Zealand].
A quick stop to draw this road sign and farm house with dead car growing in the lawn until a couple up there have a 'barney' about some work issue. Time to move on. We ride through yet another tunnel as we ride north along the river surrounded with bush. This is a beautiful ride! 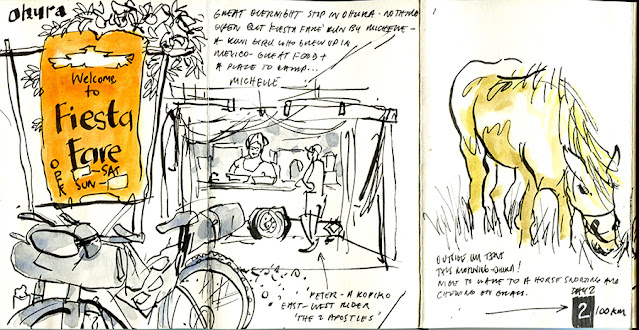 We eventually find ourselves in Ohura, another ghost town,, the one fell into disrepair after a flood caused the prison to close. Everything is closed – except 'Fiesta Fare', a Mexican food truck and garden. Run by Michelle a Kiwi girl who grew up in Mexico, she's offering superb food, a hot shower and camping in the paddock out the back. This is way better than the dehydrated food we're carrying on the bikes! We spend the night camped next to grass munching horses.
Email Post
Labels: [New Zealand] Aotearoa bike packing blog cycling Murray Dewhurst New Zealand Reportage sketch reportage

Anonymous said…
Then you don’t want to apply for a license – you’ll get the provider’s 카지노 사이트 software, gaming license, and financial administration. This type of cooperation permits you to get free from all time-consuming preparations and run a business underneath your model with ready-to-use options. Try to prepare your cost procedures in such a means in order that gamers from different areas might access and play your casinos effortlessly. To achieve that, a provider offering a number of} cost strategies is needed.
December 1, 2022 at 1:58 AM