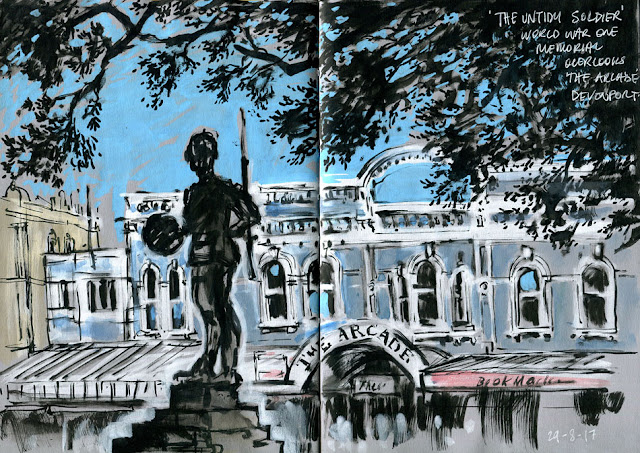 This sketch is from a fun Sunday morning spent at the invitation of Tony at Erin Hill Travel Sketching.

I arrived ready to sketch, but boy does he push his classes to work fast. I enjoyed the refreshing approach and particular this first sketch that was supposed to be a 7 minute sketch (yeah it did take a bit longer, at least twice that. The group left me behind and it needed further tidying at home).

I thought this WW1 memorial statue with overhanging pohutukawa tree would make an interesting frame for my quick sketch of the Devonport main street using my Posca markers in the Grey Book.

What I didn’t realise is the statue itself would reveal itself as interesting. Tony mentioned the work is called 'The untidy soldier' by locals and that sparked my interest. Enough for me to look it up when I got home.

Turns out this guy is one of only a handful of World War One memorials actually sculpted by a kiwi. Almost all the others dotted around the country were sculpted by Italian artists!

Weird eh. That got me thinking – maybe all of our sculptors never returned from war? Keep in mind there were only just over a million people living in New Zealand at the time and something like 10 per cent of them were killed in that war (well, something like that), so who knows, it is possible.

Anyway, it turns out that the sculptor of the Untidy Soldier, Frank Lynch was a genuine old digger who had served himself. I've learned that what he wanted to capture was the fact that the kiwi soldiers were best known not for the 'spit and polish' of the parade ground, but their bravery in battle. For sure he succeeded, he does look little untidy, his boot laces are undone, as his his jacket.

Roofing Contractors Idaho said…
Thanks for wwriting this
October 1, 2022 at 7:27 AM