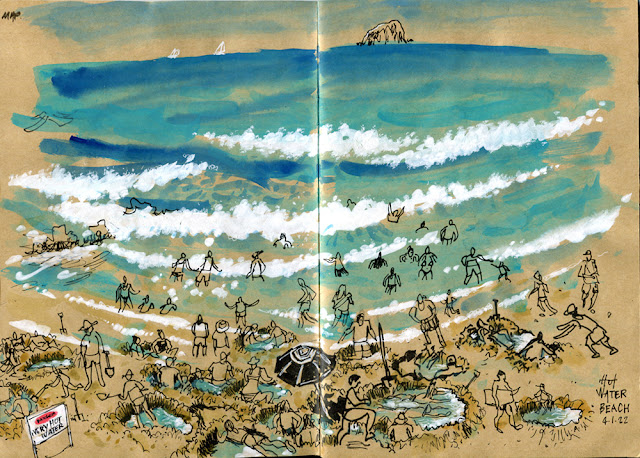 [by Murray Dewhurst in New Zealand]

I always get a kick out of showing beach sketches at the this time of year when many of you are locked deep in winter. Ii know, I know, I'll be drooling over you summer sketches soon too as the seasons change!

We spent New Years week up the Coromandel Peninsular, a popular area for kiwis to holiday in the summer which is well known for beautiful beaches. I chose the title Hit the beach for this post, but in reality it was more that the beach hit me! This year the surf was rough with constantly changing powerful rips (as big waves crash on the shore, they create a rip current that pulls out again into the sea), so for the first time that I've experienced the beaches were closed for swimming. We still got in the water – a lot – but had to be very aware of conditions!

My sketches tried to capture the energy of the surf and people in and around it. At the top you can see Hot Water Beach, which is well known for it's thermal hot spring water that rises up through the sand. All you have to do is dig a sand castle around yourself to retain the water – and to let a bit of the cold surf in – otherwise you'll get scalded! 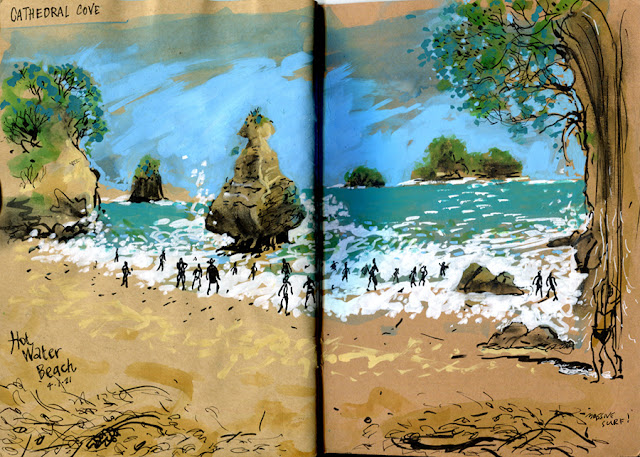 At the bottom is Cathedral Cove. It's usually packed with tourists but with international travel non-existent, and as there's a long hot walk to get there, I expected it to be quiet, but no – it was full of kiwis holiday. Despite the beach closed sign many were in the water, while unimpressed surf lifesavers watched on from their tower.
Email Post
Labels: Beach cathedral cove Coromandel hahei hot water beach Kraft sketchbook

Di said…
I love the vibrancy of these sketches Muz, the foamy bits really made me feel like I was in the water at Hahei!
January 27, 2022 at 3:31 PM

Great sketches of the beach. Saw them on the Urban Sketcher website and I thought I must complement you personally. Love the feel of colours on top of brown paper- reminds me of school days when we used to cover our book with brown paper. Don't know if it is common across countries.

Murray Dewhurst said…
Hi Rohit, thank you for comment! I know what you mean re the paper book cover, we definitely did that here too.
April 7, 2022 at 4:02 PM